Rivers. They sustain life, create beauty, carve the densest rocks into fantastic canyons and attract a tremendous amount of bio­diversity. Flowing waters play an essential part in almost all terrestrial ecosystems, providing a backdrop for infinitely complex demonstrations of interrelationships, symbiosis, and adaptation. But within the wider riparian studies, one of the most fascinating niches to be found is that of the so­ called Boat Ramp.

Boat Ramps can vary tremendously in appearance and are rarely hard to find. Some, barely a muddy, rutted surface cutting through willows, while others are wide swathes of concrete accommodating six school buses and towering stacks of hypalon. In recent decades, these incredible examples of unique eco-geography have increased in number and use, and can yield, to the patient observer, a captivating look into the habits and life span of a surprising variety of user species.

This field guide serves as an introductory reference for the novice ramp­watcher. 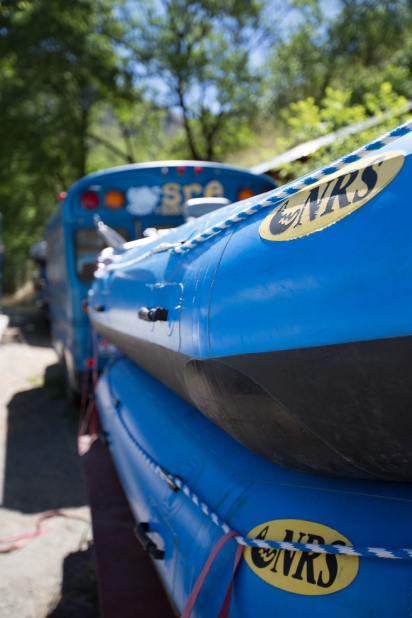 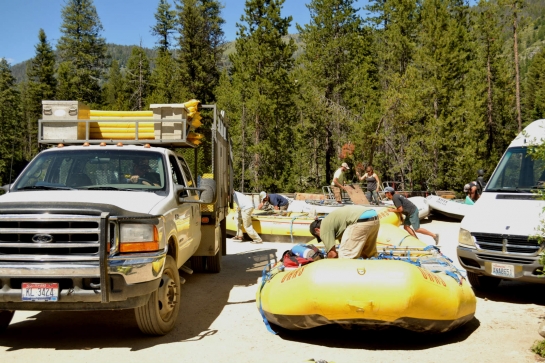 When to Watch: Seasonal activity is highest in the summer months, with diverse user species congregating from all parts of the North American continent to demonstrate brilliant displays of plumage, fascinating launch habits, and complex social interactions. Spring and fall offer consistent observational opportunities, but the user species present at this time often lack some of the unique variations to offer a truly rewarding experience. And although activity is present almost year round, when snow and ice hinder the ease of water access, there only a few hardy species to be found.

Where to Watch: Although nearly every river has some version of the Boat­ Ramp, the most diverse populations center around ramps embedded deep in the mountains of the East Coast, the Rocky Mountains, and the Pacific Northwest.

This guide focuses largely on ramps known for their day use appeal, but most of these species are also observable on ramps that provide access to multi­day trips. 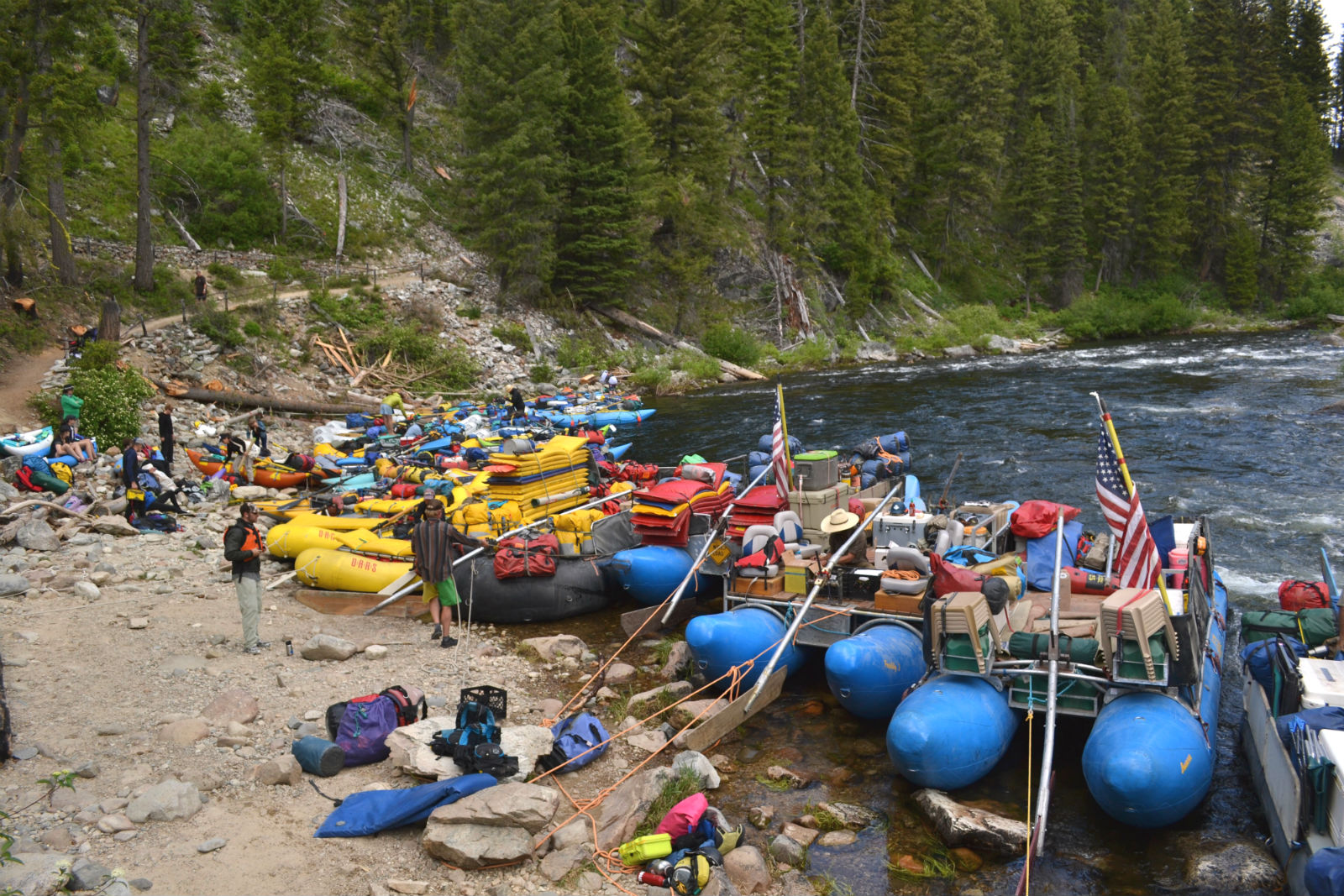 Ramp User Species
The phylum ‘ramp users’ is divided into three main genuses: kayakers, rafters, and flotsam & jetsam. Within each of these genuses there are myriad varieties of species.

Type A (rafteron obsessus)
Usually a solitary rigger, the Type A can be identified by the thin line of their mouth, the precision of their knots, and their laughing group of friends drinking beer a safe distance away. Type A’s are alphas, and both male and female can demonstrate these traits. They pass hours arranging seeming chaos into perfection, tying and re­tying knots, balancing bow and stern weight, and will sacrifice neither efficiency, safety or svelteness, even for a day float on class II. Their friends, safely outside the radiation of their anal retentiveness await the all clear, trained not to approach until the Type A signals them with a ‘snap­hiss’ and the first smile of the morning.

Credit Card Boater (compensatum fursumthin)
Easily identified by the glare created by brand new gear, Credit Card Boaters may be seen ripping tags off of PFDs, drop bags, frames and girlfriends as they use an automatic winch to lower their shiny boat directly into the water from its carpeted perch.

Abandoned (rafteron solus)
Sitting alone, on a fully rigged raft, the Abandoned is the sole member of the group not taking part in an eternal shuttle run. Depending on the communication and direction­-giving ability of their absent co­horts, the Abandoned may be drinking alone upwards of three hours, totally confused as to how it could possibly take this long. Often, their party will return with fantastic stories of unplanned escapades including but not limited to, flat tires, speeding tickets, mis­directions, celebrity appearances and fist fights. On the other hand, the Abandoned may experience a similar, hilarious coincidence or celebrity sighting, and share it, laughing, on the return of their sweaty, frustrated peers. 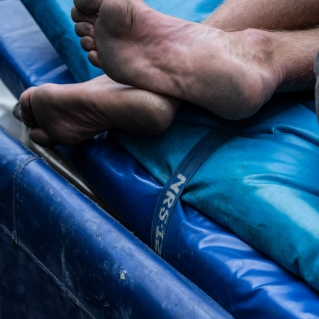 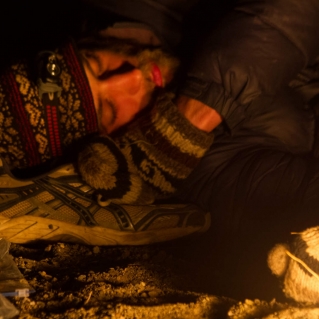 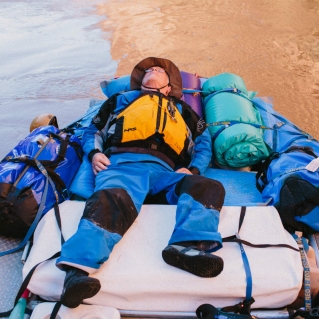 False Trailer Backer (homo testoferus)
This common species is attracted to the warm, sunny skies of mid­summer, and is well known for its large territorial display. This display involves a series of complex motions, forward, back, back, back slowly, rush forward, turn sideways backwards, repeat an indefinite number of times, often with accompanying verbal expletives. The False Trailer Backer uses this display to scare off other, less dominant natives, from the prime real estate of the center of the ramp, regardless of the presence of marked lanes. This display may last anywhere from five to 25 minutes.
Caution: May become very aggressive if approached with any offer of assistance.

Rafting Family (homo exhausticus)
Both pitied and shunned, standing in dire warning to the childless, the boating family appears to be in constant motion, but accomplishing very little. They corral gear, children, and pets, all the while pasting an almost believable ‘We’re having fun, dammit’ expression on their faces. This exciting user species is also identifiable by their frequent wistful looks toward groups of childless adults, unusual alternate curse words, such as, ‘fudge monkeys,’ or ‘cacklepants,’ and the constant presence of snacks and juice. They’re surrounded by large, bobbing sun­hats of perpetual motion. 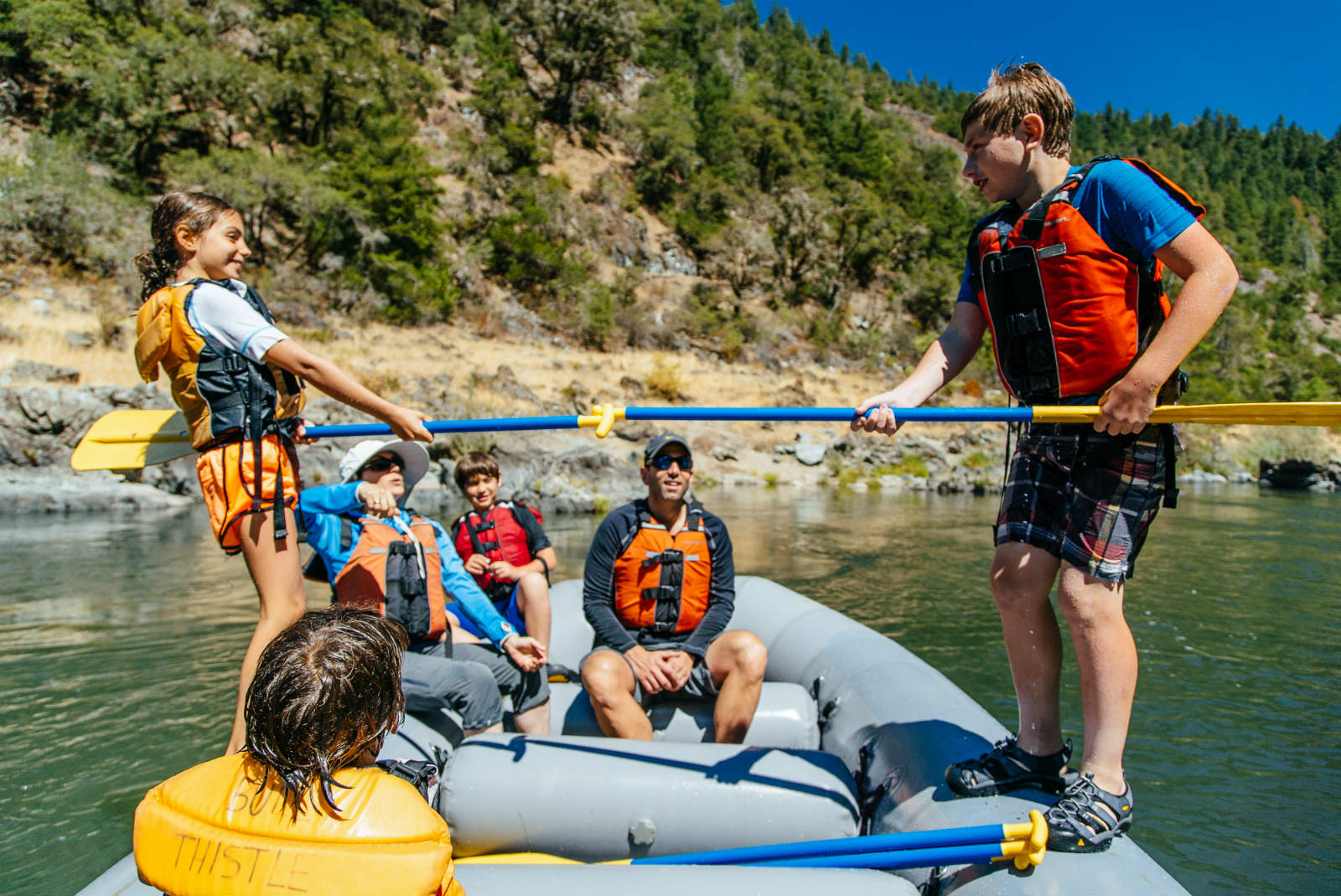 Shitshow (crapis aloverit)
Another species which requires a large territory, often to the detriment of other users, the Shitshow must, much like a miner bird, display every piece of gear it has collected across the entire ramp for an indefinite amount of time. Without this thorough disbursement, however, the Shitshow seems incapable of moving forward, but often appears oblivious to this defining tendency.

Mid­dayer (inebris brosus)
Named for the time of their appearance on the ramp, the sun is always high in the sky before the members of these squinting, initially slow­ moving species emerge. The determination to get on the water is admirable, as is their ability to somehow rig their boat without spilling their coozy­covered­cocktail. 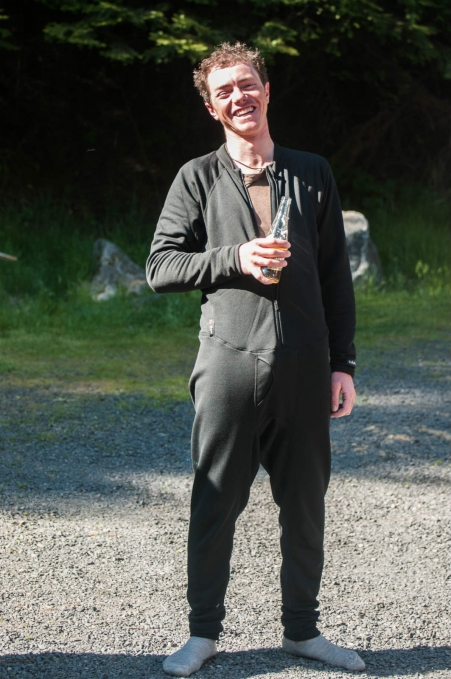 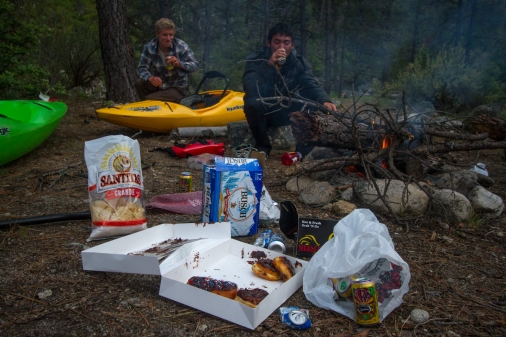 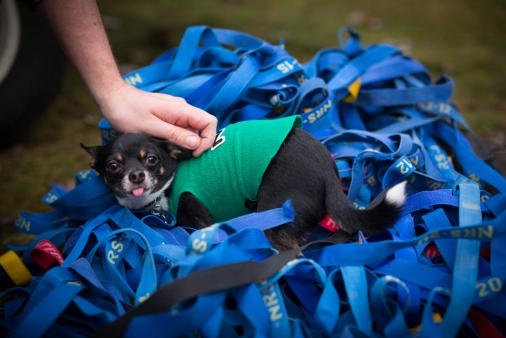 Commercial Guide (todos expertis)
The most common species found, commercial guides may vary greatly in temperament. Although another largely territorial species, usually requiring the entirety of any ramp to perform their launch habits, some guides may offer assistance when requesting the removal of other species from their stomping grounds, while others will simply trample them without pause. They are devastating to an otherwise serene environment, briefly flooding the entire ramp with boats of red, yellow or blue, along with the accompanying flock of stumbling, helmeted tourists. Yet the extreme efficiency with which they move, along with their highly evolved communication skills make them a powerful and fascinating species that does often play an essential role in the long­term sustainability of the ramp eco­system. 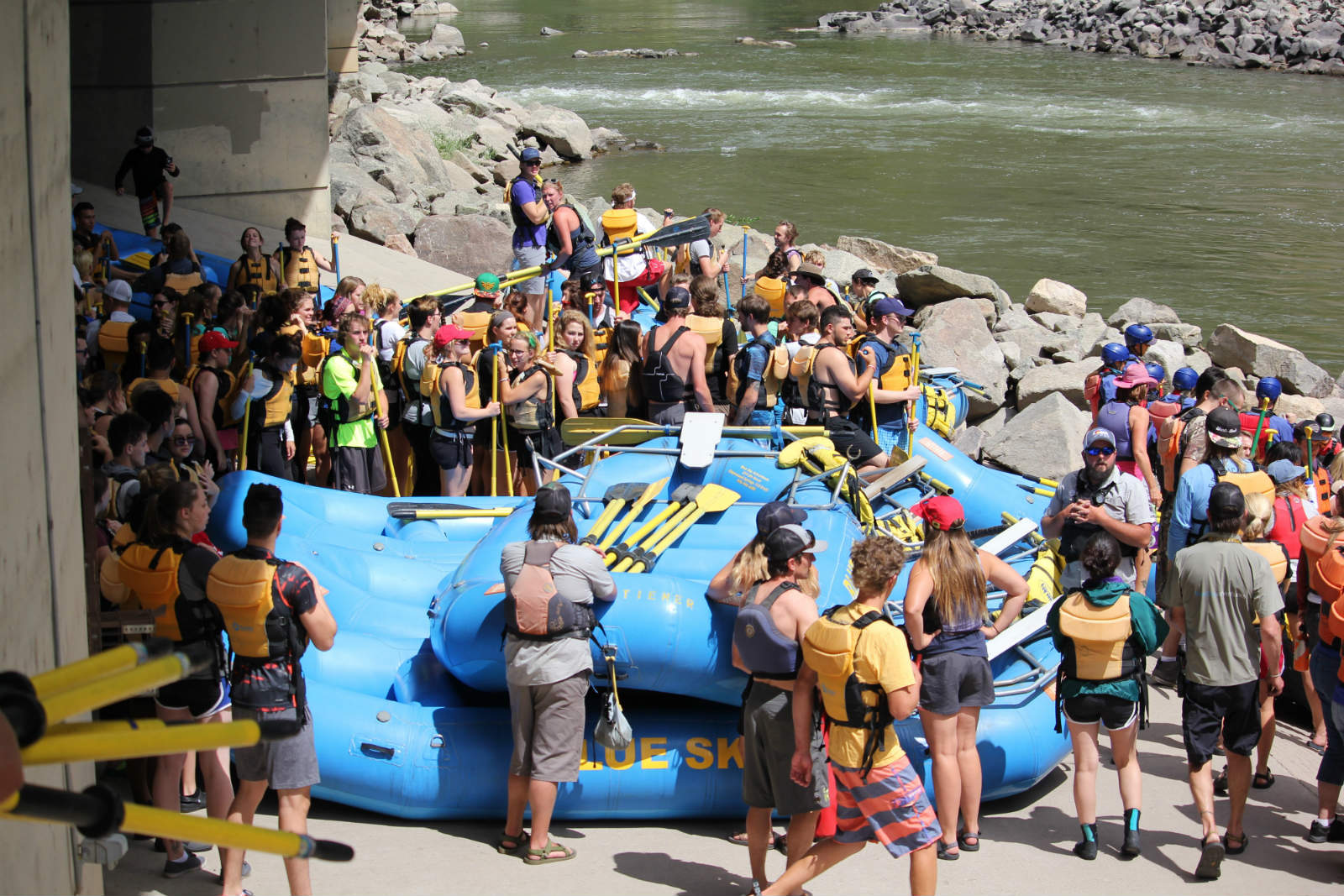 Off­-duty Commercial Guide (drunkas skunkas)
Often demonstrating traits of both the Mid­Dayer and the Commercial Guide, they group with their own kind, and may be heard to mention their profession multiple times before cramming six people into a mini­sized raft. All carry customized fiber­glass paddles. 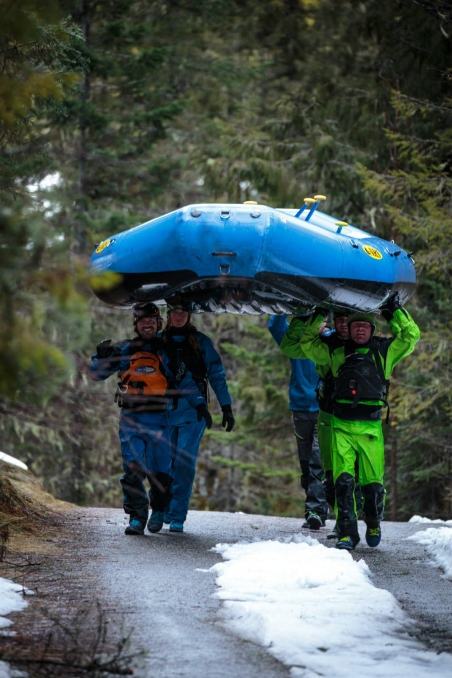 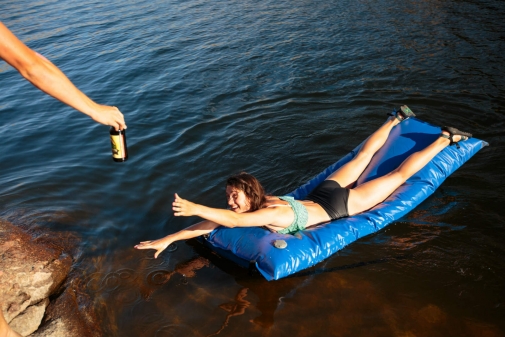 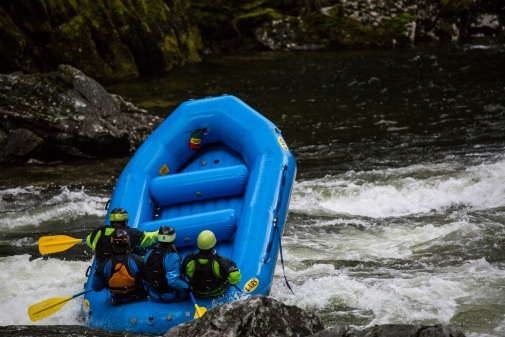 River Dog (washere firstus)
Frayed on most edges, with skin etched by the tools of dry wind and a lifetime of sunshine, River Dogs are a rare, but crucial bio­indicator of the health of any ramp’s ecosystem. They move smoothly, unhurried, usually with a like­minded contingent of users, some younger proteges attached. Their gear, like their personality, is well­-worn, unassuming, but strong and full of stories.

Professional Kayaker (badassus brokashis)
As any dedicated ramp­watcher knows, this rare species is difficult to spot due to the extreme efficiency and rapidity with which they move. No one has fully established how he or she gets their PFDs on, because they are perpetually wearing them, and the actual event has yet to be witnessed by a human being. The best way to identify them is usually by the glint from the scarred surface of the most impressive creek boat you have ever seen.

Amateur Kayaker (boatitus weekendus)
Much more common than his professional cousin, the amateur is generally good­natured, and very social. Size and shape are widely variable. Frequently identifiable by the repetition of very domain specific words such as ‘boof,’ ‘blunt’ and ‘windowshade,’ as well as the near constant presence of PBR cans. Will often loudly query others of its species about various wave features and how they are ‘playing.’ 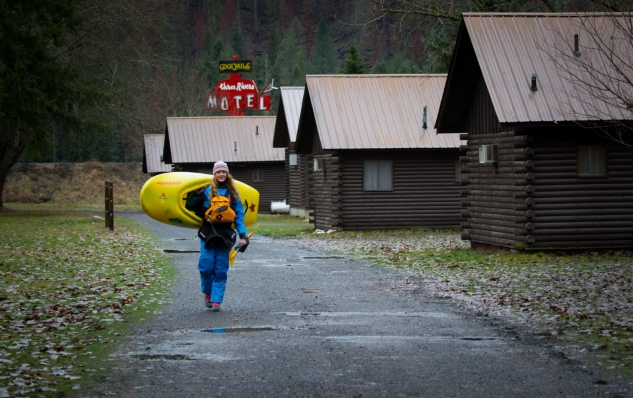 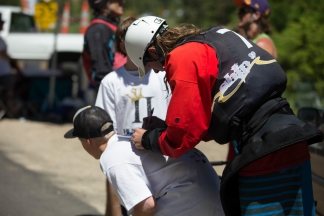 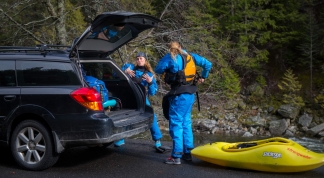 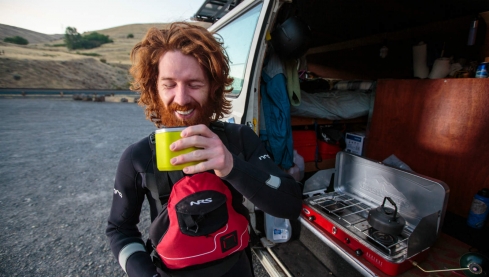 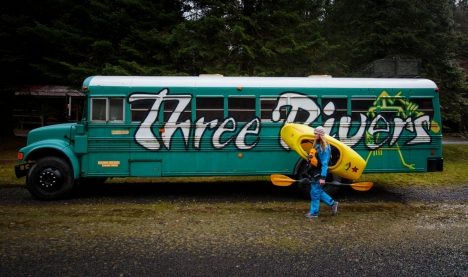 Kayaker on a Date (potentialus coitus)
A kayaker involved in a courtship ritual is a rare and fascinating subject and a completely different species. Solicitous to the extreme of its potential mate, it may have coaxed him/her out to the river for the first time. This is a very delicate moment in the relationship. One may observe cautiously, from a safe distance, as he or she repeatedly explains the purpose of the handle on the front of their skirt. The likelihood of successful coupling may be extrapolated by the level of excitement (or frustration) displayed by the potential mate. 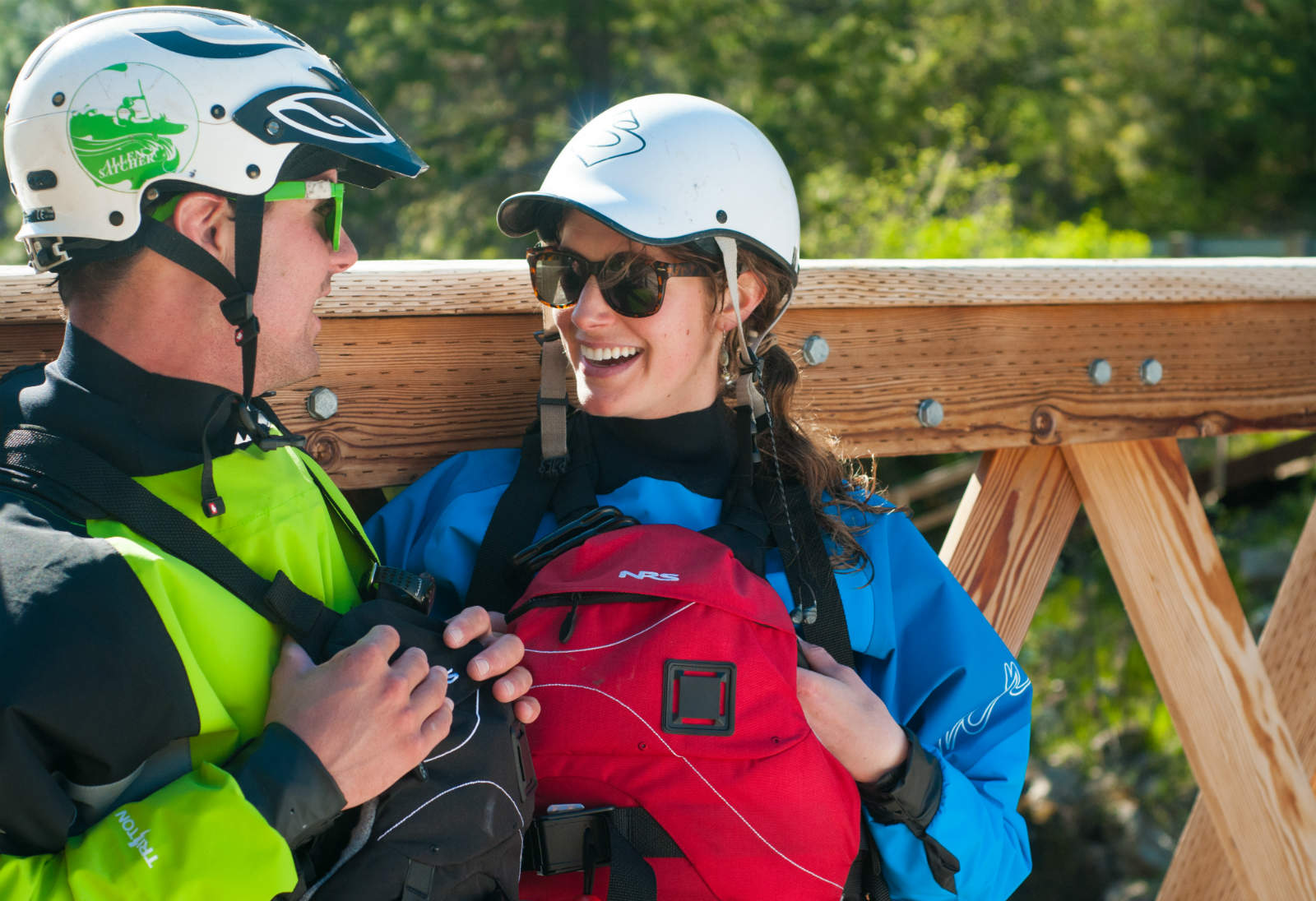 Lapper (repetitus brofus)
Common at the take out for a short, splashy run, the Lapper will approach species of all variety, assuming they have a working vehicle, and, in all varying techniques of persuasion, offer beer, weed, stories, or cash to get a ride back to the put in. You can determine the approximate number of laps completed by the number of beers left in their twelve pack. By the last lap, they will be relying entirely on their winning personality, which is at odds with the increased funkiness of their neoprene. 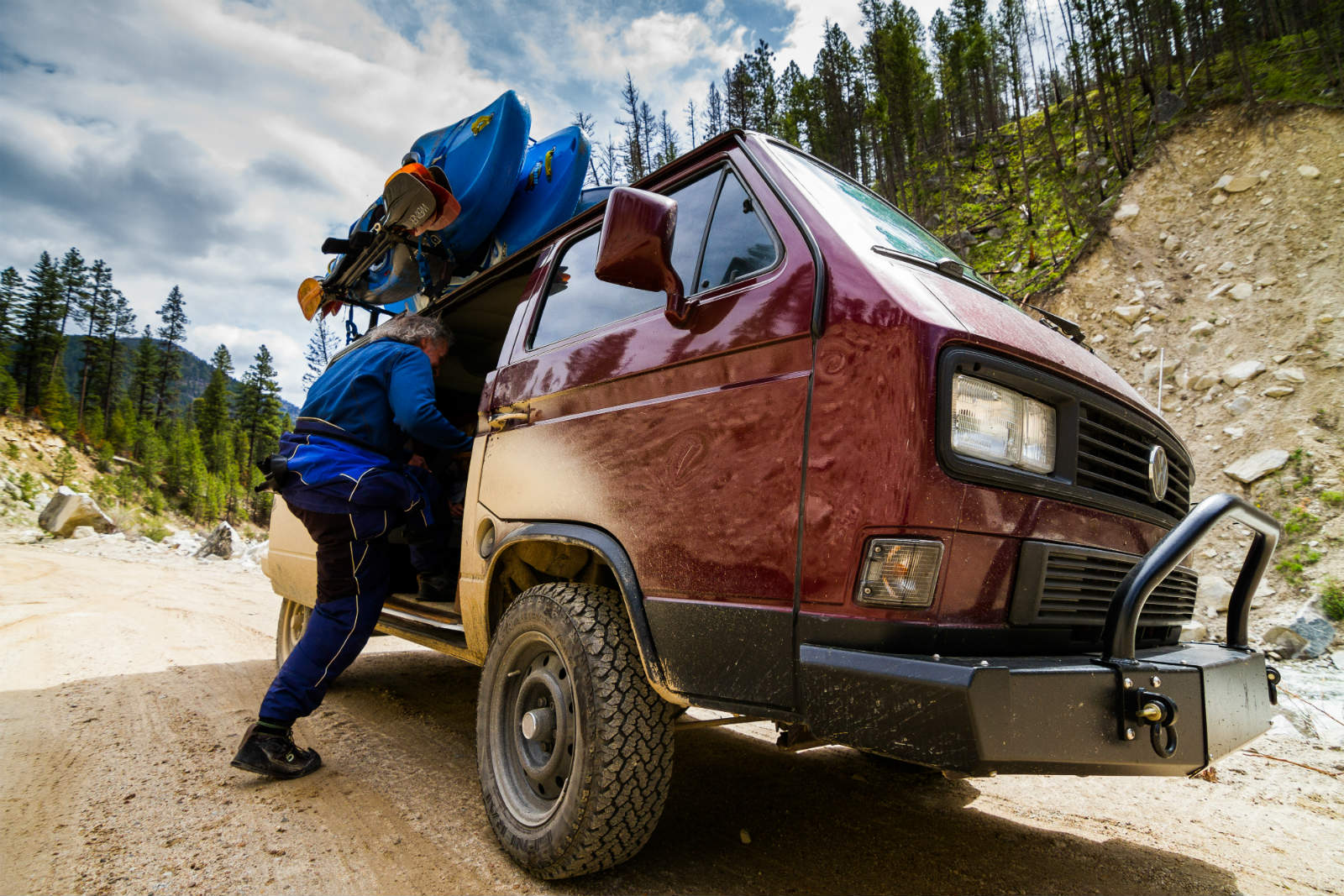 Note: Much like the random gear sometimes found downriver from a flipped raft, none of the species within genus Flotsam & Jetsam share many common traits with each other. The hodge­podge of specie is grouped together largely because they are an essential part of any ramp eco­system, and yet fall completely outside the Rafter and Kayaker dichotomy.

The Ranger (exhasperus usfs)
Identified by their unflattering brown or green plumage and look of constant irritation, the ranger is a species often overlooked, but vital for maintaining the health and vitality of large boat ramp niches. When lacking the experience of other user species, however, the ranger is frequently ignored and potentially abused, despite his supposed alpha status. Most likely to come into conflict with Commercial Guide and Mid­dayer species.
Caution: Can cause painful fines or prevent river.

Fly Fisherman (hukem enlippus)
Whenever the water is clear, members of this khaki-colored species flock to the boat ramp, seeking out their prime habitat, eddies, where they will attempt to outsmart some fish as gracefully as possible. Although they occasionally share traits with the False Trailer-Backer, they are rarely seen interacting with any other user species. In fact, their aloof launch habits make it quite clear that the ramp actually belongs to them, and they are graciously allowing all others to use it. Fly Fishermen may be observed quietly as they transfer their drift boats, or dories, from a padded trailer to the cradle of the river with the gentle, protective hands of a mother bathing her child.
Caution: Easily agitated by noise, this species may respond with a barbed sting. 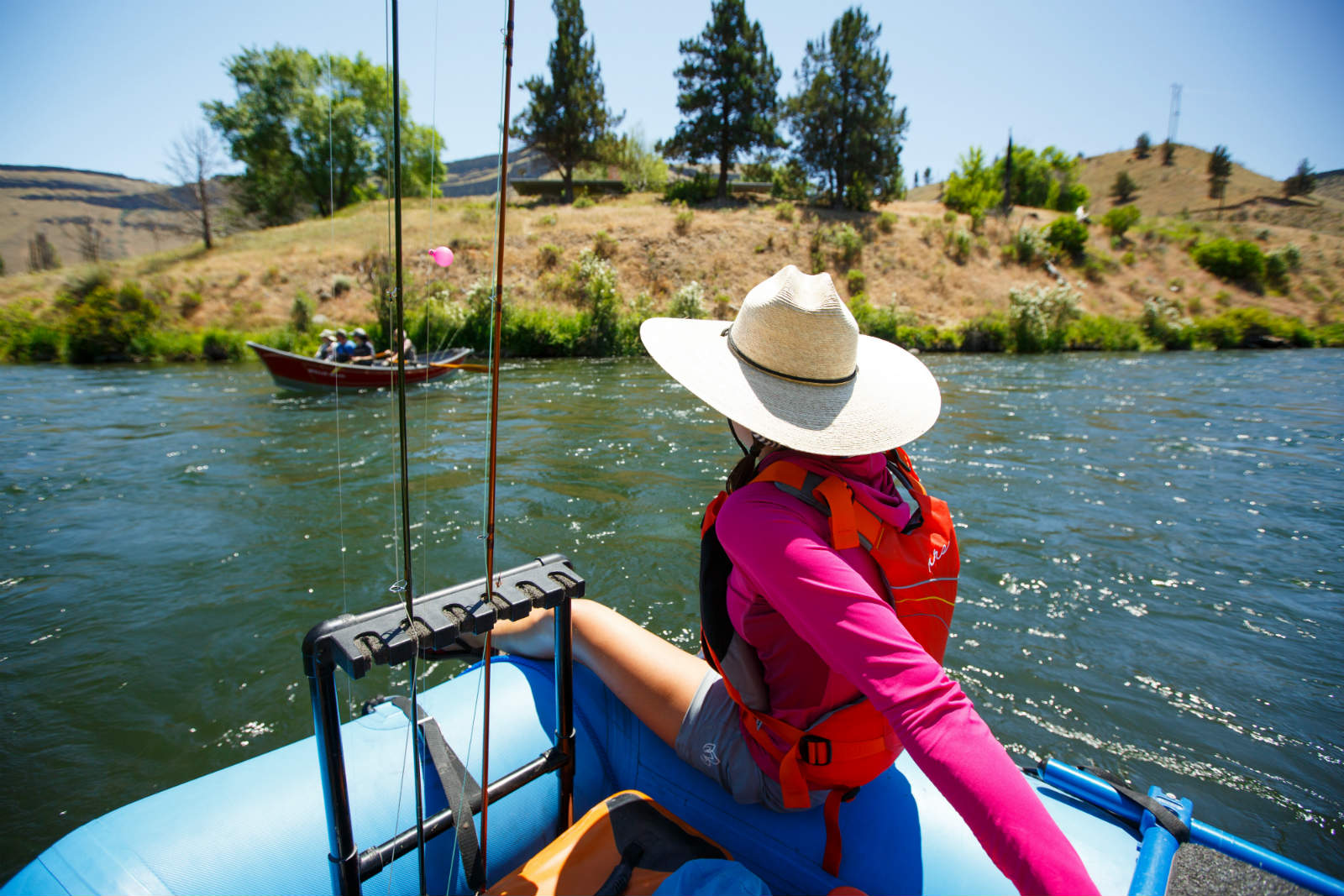 In the Wayer (tourista confustis)
These users visit the boat ramp only briefly, and are obviously not in their natural environment. They first appear confused by this piece of concrete extending directly into the water and often assume it is built as an oversized parking spot for their rental car and/or playground for their children. They will quickly become quite agitated as other species rush past them with huge, awkward pieces of plastic nonsense, and may appeal to the Ranger for retribution.

Rescue Bait (idiotus tuberons)
Quickly identifiable by their inflatable alligators and lack of PFDs, Rescue Baits are often seen riding a variety of pool toys and Wal­mart quality rafts. They are always in close proximity to floating receptacles of cold beverages and will change their skin color throughout the day to a shade of deep red.

Author’s Note: After over a decade of submersive research, the author of this guide was thrilled to identify a common ancestor with these beautiful creatures. She has discovered common traits with both rafteron obsessus and homo exhausticus which make her a deeply conflicted hybrid living in near constant state of panic.